Prior to 1996, several Fed Fed branches had sprouted in various big cities of Cameroon. In a visionary direction of the President of Fed FedLimbe, Na RuphinaMutia, a consultative meeting was convened of the existing Fed Fed branches with the objective of establishing a network of all the groups.The first consultative meeting held in September 1996 in Limbe. The major outcome of this meeting was the decision to draw up a Constitution to create a networking organisation of all the branches and any future branches and to have this adopted at a constituent meeting.

The 2nd consultative and preparatory meeting was convened in October 1996 in the Mofors Residence – Bueawith the objective of discussing the draft Constitution. Elements for a Constitution were developed.

The 3rd Consultation Meeting which was a constituent assembly was organized in November 1996 in MammiFogams Residence in Tiko. The major decisions at the constituent meeting were as follows:

A Pioneer Executive Committee of Nkumu Fed Fed was elected composed of the following: ADVISERS:

A national anthem was also adopted at this meeting.

Nkumu Fed Fed aims at empowering underprivileged and vulnerable groups in society with a focus on women and the girl child of rural communities, as a means of fighting poverty and guaranteeing equity in social and economic development. . 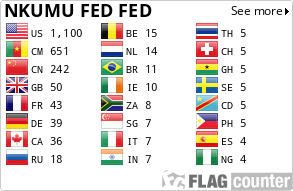